You are here:
News and UpdatesNotice

It is estimated that over 3 million people have been affected by the torrential rains and flash floods in all provinces of Pakistan. The National Disaster Management Authority (NDMA) has estimated that the massive floods have so far claimed more than 1,033 lives and injured 1,527 people in the country. Balochistan is the most affected province having the highest toll of deaths which is more than 300. Almost 495,259 houses have been damaged and the number is surging. 3,541 kilometers of roads and 149 bridges are destroyed. The loss of livestock has been estimated up to 719,559.

The recent monsoon rains in Pakistan have caused devastation in the country, submerging several districts and killing hundreds. The torrential rains have intensely affected the entire country with Balochistan taking the hardest blow of heavy rains. The floods have affected 360,000 people, causing damage to more than 26,897 houses in Balochistan. 37 districts of the province have been declared under emergency including Lasbela, Jhal Magsi, Jaffarabad , Naseerabad, Sohbatpur,  Bolan,  Killa Saifullah, Pishin, Noshki, Sibi, Kachhi, Khuzdar, Kalat, Killa Abdullah and Chaman. The rainfalls in Balochistan and Sindh this year have surpassed the records of the past 62 years with a colossal 450% increase.

Schools Affected by Flood in Balochistan

The education sector has severely been impacted by the recent flood and rain emergency, in terms of destruction and damages to schools, use of schools as temporary shelter for displaced people, disruption of schooling and the ongoing academic year, and loss of learning materials, as well as psychosocial stress experienced by children, adolescents and teachers. The Provincial data from provincial Education Departments show that at least 544 schools have been damaged or destroyed in Balochistan.

The report of School Education Department, Balochistan indicates that 1121 classrooms, 24 examination halls and 188 boundary walls, 264 washrooms and 20 staff rooms of schools were affected by the rain in 32 districts of Balochistan. In addition, attendance of 78910 students have been affected due to the destruction of school buildings during the current flood.

The devastating flood has also affected BEF CS and Private Schools (PS). The Rapid Need Assessment (RNA) conducted in 29 districts of Balochistan by BEF Regional Staff (RS) found that 21% of CS operating in community provided spaces have completely been destroyed (1 in Loralai, 1 in kharan, 1 in Kalat, 1 in Awaran, 1 in Khuzdar, 2 in Bolan, 2 in Sibi, 3 in Las Bela, 6 in Naseerabad, 6 in Panjgur and 14 in Jhal Magsi), while 109 CS have partially been damaged including 218 classrooms, 49 boundary walls, 47 toilets, 103 roofs and 98 room wall. The flood has affected overall 23% of BEF CS with enrollment of 11121 which makes it 27% of the total enrollment 50% of whom are girls. Data collected from Private School Operators (PSO) indicate that 30% of the Private Schools (PS) have been affected by the flood.

The Balochistan Education Foundation (BEF) has mobilized its teams to carry out RNA and the impacts of the flood on Community and Private Schools. BEF Regional Staff (RS) visited more than 350 Community Schools (CS) in 29 districts and conducted RNA and meeting with the Parent Teachers School Management Committees (PTSMCs), Community School Teachers (CST). In addition, 200 Private Schools (PS) were also contacted for ascertaining the level of damage to PS. RNA for PS is underway and shall be completed in in a week time. BEF field teams are in contact with other communities and will support further RNA in the  The devastating flood has also affected BEF Community Schools (CS) and Private Schools (PS).  affected areas.

The BEF management is in coordination with national and provincial stakeholders, such as the NDMA, PDMAs, and DDMAs and the donors for support to the Community and Private Schools damaged by the flood.

BEF plans the following activities for providing educational services to the flood affected children of its Community Schools (CS) in Balochistan and requests the support of donors for the purpose:

1.       Restoring access to learning through Temporary Learning Centers (TLC) and alternate modalities in the affected districts including second shift schools to avoid interruption of education services.

2.       Provision of teaching and learning material.

3.       Cleaning and disinfection of schools to facilitate the resumption of educational activities and providing conducive learning environment.

4.       Establishment of Temporary Learning Centers (TLC) for 11350 children 40% of whom are girls are in the flood affected districts.

5.       Provision of Education supplies to the children in BEF Community Schools affected by flood.

6.       Provision of emergency education supplies such as school-in-a-box, school tents, recreational kits and other teaching and learning materials for resumption and continuation of education and play activities.

7.       Provision of PSS for flood-affected children, including training of teachers on provision of PSS including emotional/social support, play, building children’s social networks, and identifying children in distress for referral to initial counselling.

8.       Training of teachers on multi-grade teaching in emergencies.

·       To provide children with continuity of learning, safety, and a sense of normalcy, and to prevent children, especially girls, from dropping out of school, BEF Plans to approach the doners for provision of schools tents, learning materials, and recreational kits.

·       BEF believes in community participation and engagement and has formed PTSMC’s in all villages where CS are established. PTSMC’s will be mobilized to participate in rehabilitation of the damaged community schools.

·       Schools are currently closed in summer zones districts due to heavy rains. The BEF response will facilitate continuity and resumption of formal education and learning by providing TLCs in affected districts. For the purpose BEF, has mobilized its PTSMC’s and communities and looks forward to doners for support.

·       BEF believes in accountability and transparency and will ensure participative approach and community participation in all activities and request the doners to support BEF to facilitate and bring children back to schools.

Special Thanks to UNICEF Balochistan

BEF extends its sincere gratitude to UNICEF Balochistan for providing a school tent and leaning material and recreation kits to one of our community schools affected by flood at district Khuzdar and requests for facilitation in other districts of Balochistan. 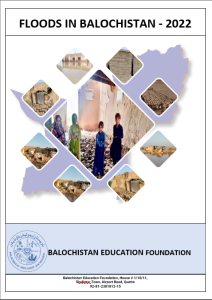